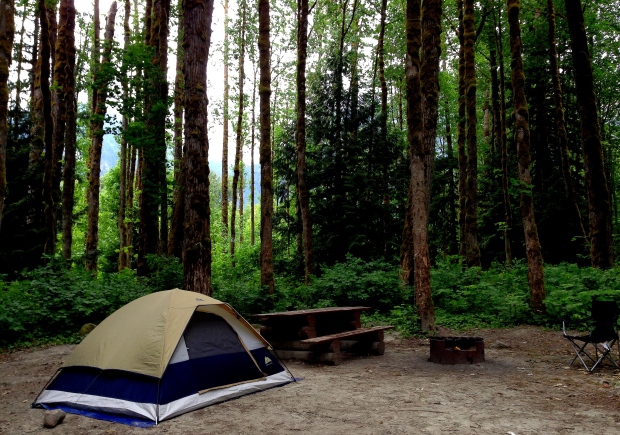 Holiday Monday and everyone was heading home from a long weekend in BC’s backyard. I didn’t have to be back at work until Tuesday night, and thought that I would go camping Monday, after the May-long crowds dispersed. While I always enjoy staying at Porteau Cove, I didn’t want to pay, and I remembered reading about a free user maintained site near Squamish.

My mind was made up, I would go check it out.

I was on my own, driving the Sea to Sky North through Squamish, before turning West onto Squamish Valley Road. I followed the tree-green, winding road until it turned to dirt at the Squamish Nation Tree Farm, about 25 kms North of the Hwy 99 turn off. I didn’t have to follow the dirt road for long before I saw the bridge after which the campground is located. As I crossed the single lane bridge over the Squamish River, I slowed to take in the beautiful views; snow capped tops of what I believe are Pelion Mountain and the Tantalus Range, with a majestic waterfall cascading in the distance. 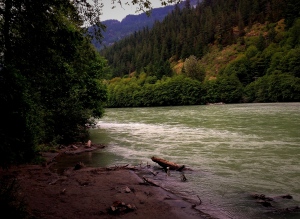 I arrived at 2pm and set up my tent in a large site that looked like it had hosted a party the night before. Empty cereal and beer boxes had been left behind for fire starter, along with shell casings… which made me feel further into the wilderness, that and signs noting both Black and Grizzly bears frequent the streams to feed. I built a small fire before heading to check out the river. It was a pale green, beautiful in its glacial run off, with sandy shores, though most of the beaches were inaccessible from what I explored.

By night fall, a friend had arrived from the city to join me around the fire. It seemed like we were the only ones out there in the dark, we couldn’t hear any of the other campers or see if they had fires. It was sheer black away from our fire, even the stars were hiding beneath clouds.

I’ll be going back to this campground, free and close to home. I always love spending time in Sea to Sky country.